One of the first things you may notice when delving deeper into using the apps in iOS 7 is that it’s a white world. When the iPhone was introduced in 2007, it was like a magic. You had in your hand infinite possibilities, but it was noisy and strange. Skeuomorphism (see previous post for a quick definition and discussion) was a temporary solution to bridge the gap, leading us by the hand from the real world into the digital space of the screen. By now, we’ve developed an intimate relationship with our phones–they are our portals, woven into almost every aspect of our lives, acting as an extension of ourselves. It’s time to let go of the shaded and textured rope.

How do you create space and maintain order and visual interest on a screen the size of a playing card? Making liberal use of white space and using bright pops of color to guide the eye keeps the clutter to a minimum. While we float through the ether of digital space, we are still grounded in place. On our journey, we need to go back, to move forward, and go back again. Moving through blurred transparent layers helps us to feel like we’re in the same place even though the scenery/features have changed. In the map in your mind, you know where you are.

Shifts in design signal changes in society. When Herbert Bayer at the Bauhaus school established a crisp visual style with san serif typefaces, he was pushing against the heavy Gothic fonts universally used at the time. He, and the others at the Bauhaus, believed that the arts should be in service to all types of manufacturing, building, and making including industrial design, architecture, graphic design, even typography. They were reacting to the swift modernization and social changes taking place around them at the beginning of the 20th century; they believed that the objects and environments around them should reflect these shifts. It should be a designed world. With care and attention, even the most basic and functional items could be elevated through design.

It is Bauhaus’ legacy that we even care about the number of pixels around an icon. So, what does the new operating system signal? How does the shift away from skeuomorphic design reflect the current changes in society and our increasing interdependence on mobile technology? I would argue that stripping away the clutter and embracing a light, more buoyant, design style acknowledges that we are already in the cloud, connected, but untethered. We are not lost in the white space, but at home. 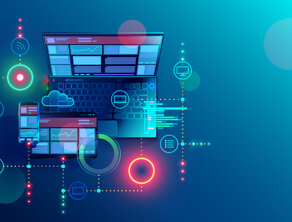