iOS Programming – Then vs Now

When Apple released the AppStore in 2008, it began a revolution that led to the largest and most vibrant application ecosystem in existence. Objective-C, the programming language for writing apps for Mac OS and iOS, went on to become the third most popular language of modern time after C and Java.

Objective-C has evolved considerably and we have features such as blocks, literals, subscripting, ARC etc. In a span of 3 years, so much of how we program has changed for the better. This article points out some of these new features.

Literals are shorthand notation of writing fixed values. Until recently, Objective-C only had literals for NSString.

With Apple LLVM 4.0 onwards, literals for NSArray, NSDictionary and NSNumber were introduced. The following is the old way of writing code:

With literals, the same code can be written as follows:

Literals are aimed at developers’ happiness and promote readability.

According to Apple’s documentation: Automatic Reference Counting (ARC) is a compiler-level feature that simplifies the process of managing object lifetimes (memory management in Cocoa applications). ARC is a compiler generated step that adds retain/release/autorelease statements invisibly to the code for the developer. The following is an example written using the manual memory management environment:

Under ARC, the same code would be:

While long time developers may still vouch for manual memory management, ARC keeps things simpler for beginners and is probably the way of the future.

Xcode 4.4 was released with Apple LLVM 4.0; it introduced default property synthesis. All the properties that are not @dynamic and do not have a custom getter / setter defined, are now automatically synthesized by default.

For example, have a look at code written using Apple LLVM 3.0 compiler and earlier.

The same code written using LLVM 4.0 and above with Default property synthesis would look like this:

This not only saves developer time, but also reduces the number of redundant lines of code.

iOS 4.0 introduced blocks, a language-level feature added to C, C++ and Objective-C. Blocks are like functions, but written inline with the rest of your code, inside other functions. They are sometimes called closures or lambdas in other languages.

Blocks are handy in wrapping up a piece of code and effectively storing it for later use. In other words, blocks are excellent for handling callbacks and also acting as inline methods.

If you look at it, a developer has to think hard to understand the flow in which the code is executed. If you implement the same thing in blocks, it looks like this:

If you look at the above example, all the context-related arguments have disappeared. Using a block, we have been able to increase cohesion by moving code to where it belongs, making it easier for a developer to understand. Let’s take a look at other example.

Prior to blocks, we used to write it the following way:

With blocks, you can implement the same thing as:

Blocks have been added to all the newer APIs and offer the same level of syntactic sugar to the developers.

Prior to storyboarding, User Interface design was primarily done using Interface Builder’s nibs/xibs. While nibs are nifty, Apple decided to tweak the current workflow of designing apps and introduced storyboarding to the developers with Xcode 4.2. 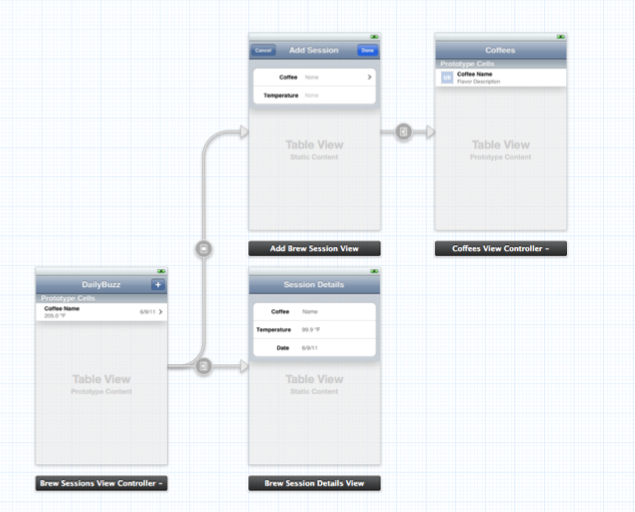 Storyboarding helps developers visualize the appearance, navigational flow and transitions between scenes of the entire application under one canvas. On top of that, Xcode’s already powerful visual editing tools makes it easier for developers to design, layout and add/remove controls to a scene on the fly.